Out of the blue 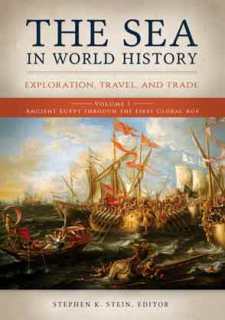 The Sea in World History: Exploration, Travel, and Trade has just been released as an eBook by ABC-CLIO. This two-volume reference book, edited by Stephen K Stein, presents a global history of the sea from ancient civilisations (4000 to 1000 BCE) to the modern era (1945 to the present day). The eight chapters are presented chronologically. Each chapter focuses on specific nations or regions, with entries on key individuals and events. I contributed three articles in Volume Two: